Counting of votes is live. It ends on June 13th at 2pm CEST.

The number of IOTA tokens you own in a wallet of your Firefly profile decides how many votes you will be able to cast in this decision. You can vote with each of your wallets separately, and you are even free to vote on different opinions with different profile wallets. You can only use the total number of tokens in a wallet for voting. Should you want to use a smaller amount than currently in your wallet, please create a second wallet under your profile and move the number of tokens, you don't want to use to this new wallet before attempting to vote. Important notice! Voting and staking are completely separated functionalities and do not influence each other. Voting will not change your current staking process, and staking will not affect an ongoing vote. The procedure to cast a valid vote follows these steps. You have to update your Firefly Wallet to the latest version, which will be released on the official Firefly website once the final schedule for the vote is announced.

Case one: Cast your vote in the seven-day "voting open" period.

This is the standard way of voting and will let you achieve the maximum possible votes in this decision. 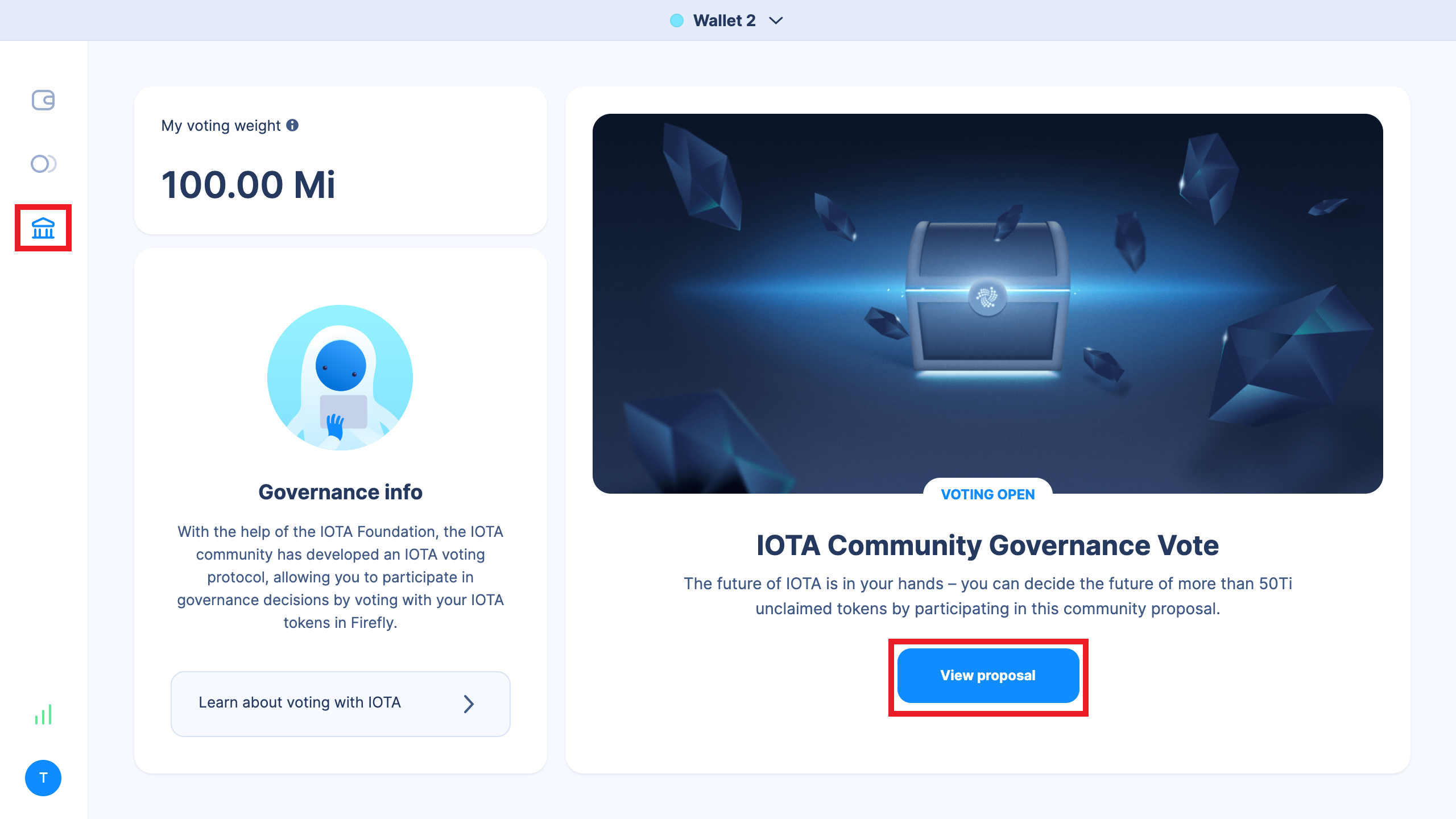 Upon entering the governance tab of one of your wallets, your first decision is to choose what should happen to the Treasury Tokens. Use the "cast vote" button in the option representing your opinion 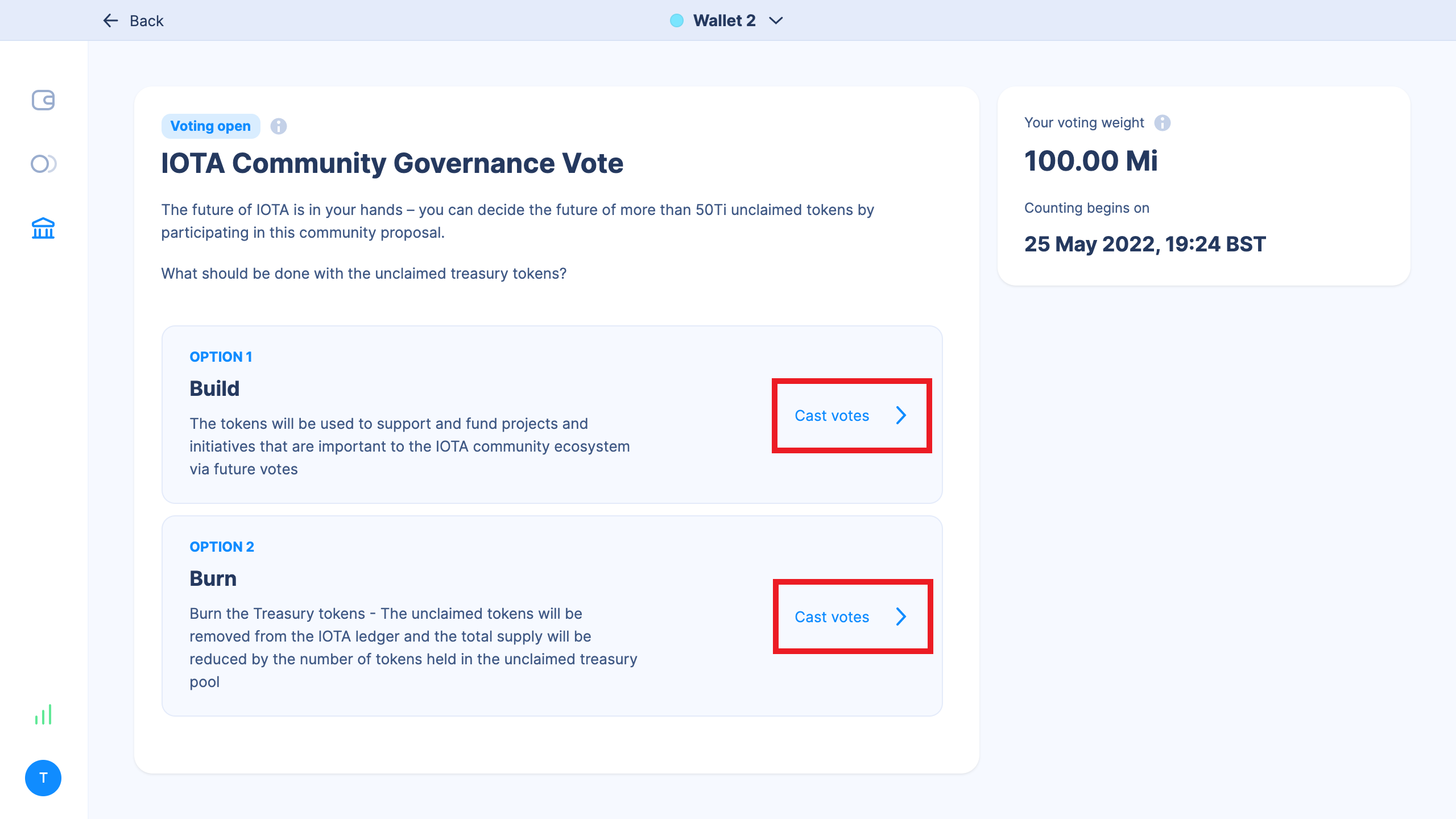 Confirm your selection with the "confirm" button.

You will now confirm your vote with the stronghold password or your Ledger Nano hardware wallet.

You will receive a confirmation that your vote has been submitted. 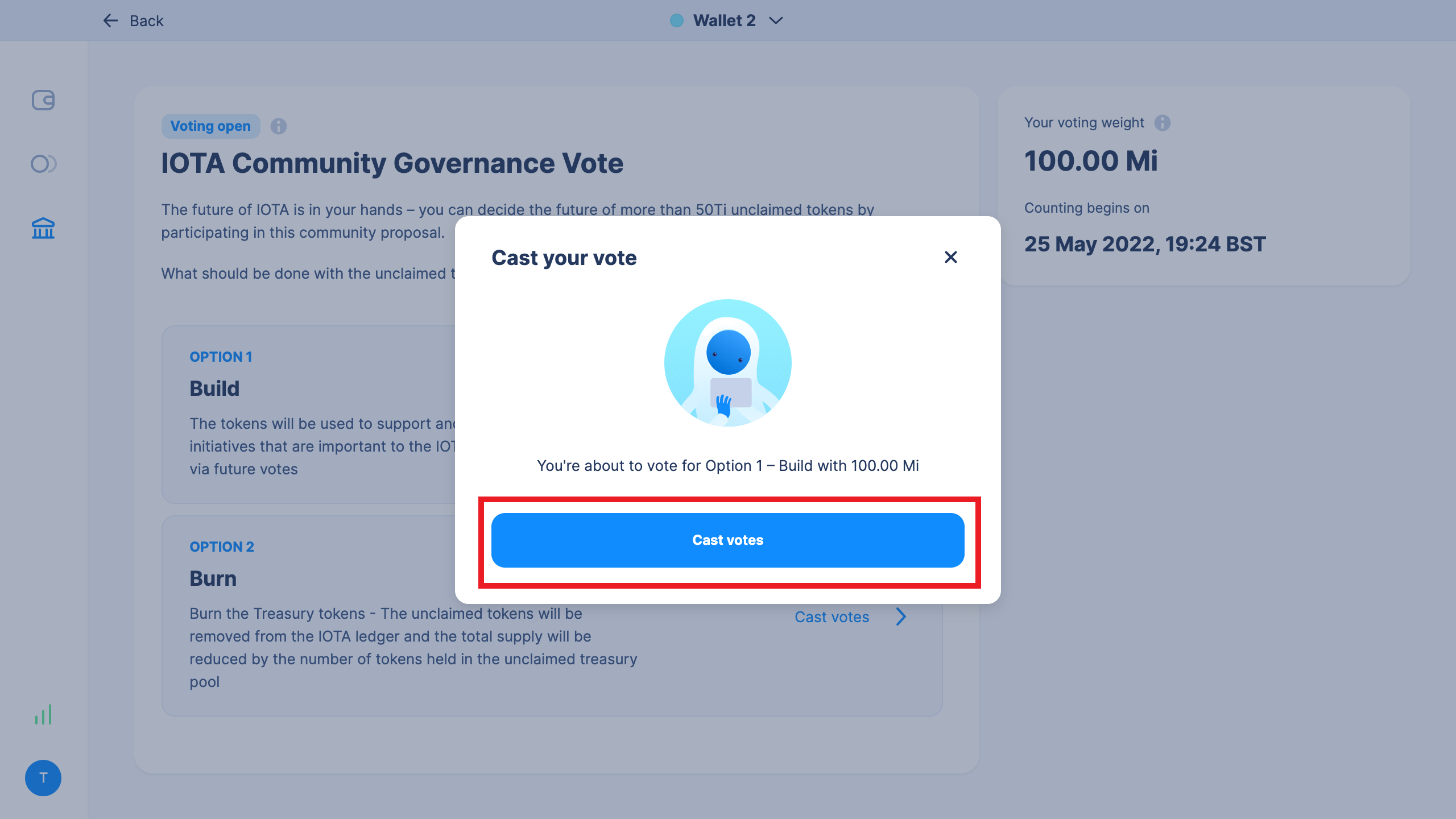 Once your vote is confirmed, you will see in the governance tab which of the two opinions you have selected and how many votes you have cast in this vote. Also, the remaining time before counting the votes begins is displayed. 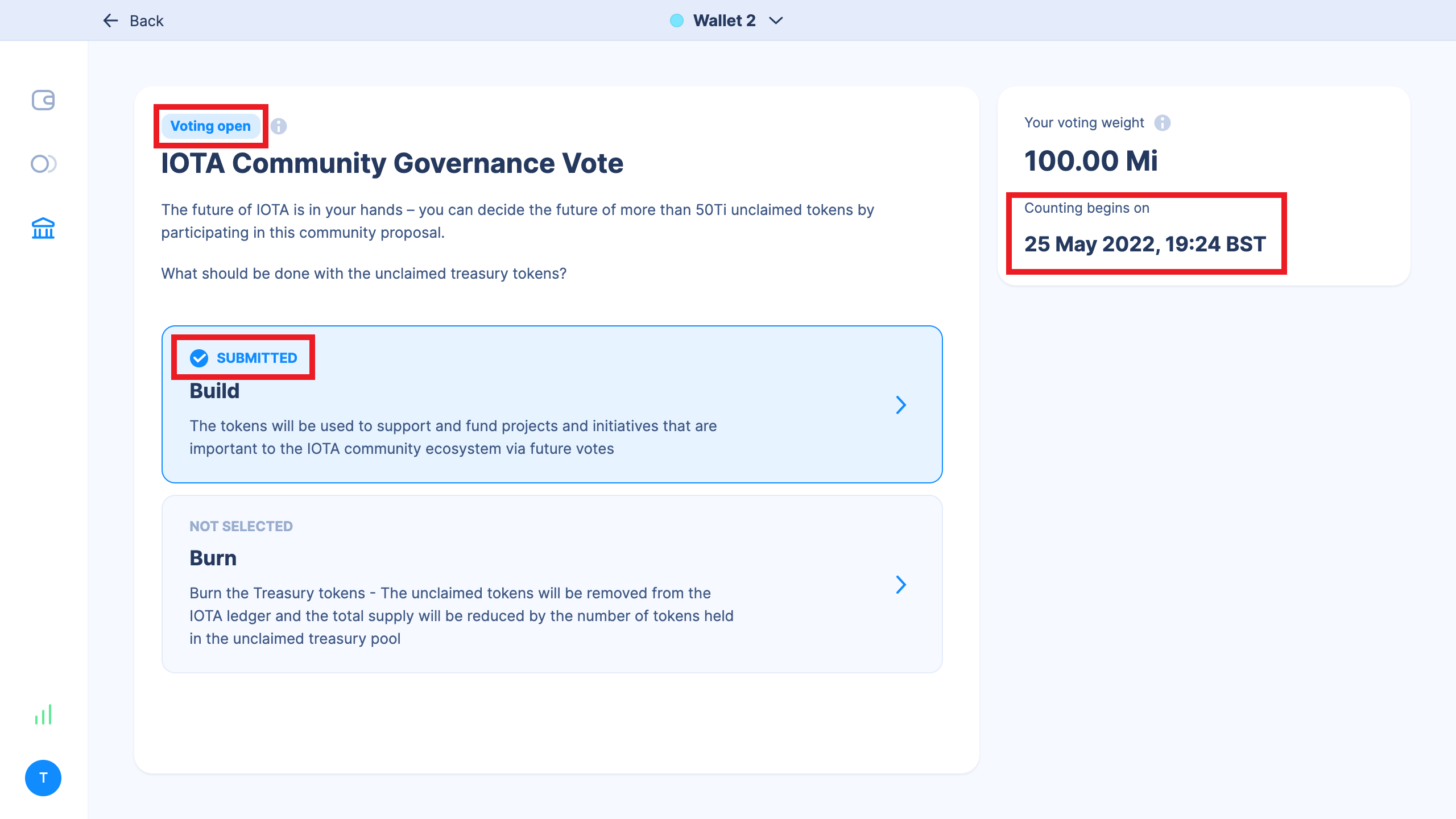 You have completed the voting and can now wait until the defined time frames have passed.

It is also no problem if you change your mind during the seven-day "voting open" period. You are free to stop the vote or change your opinion without consequences during this time frame.

In the governance dashboard, click on the option you have previously chosen (highlighted as "selected") and use "change vote".

Confirm the decision with your password or Ledger wallet, and Firefly will remove your votes.

You are now free to initiate a new vote as described above at any time. 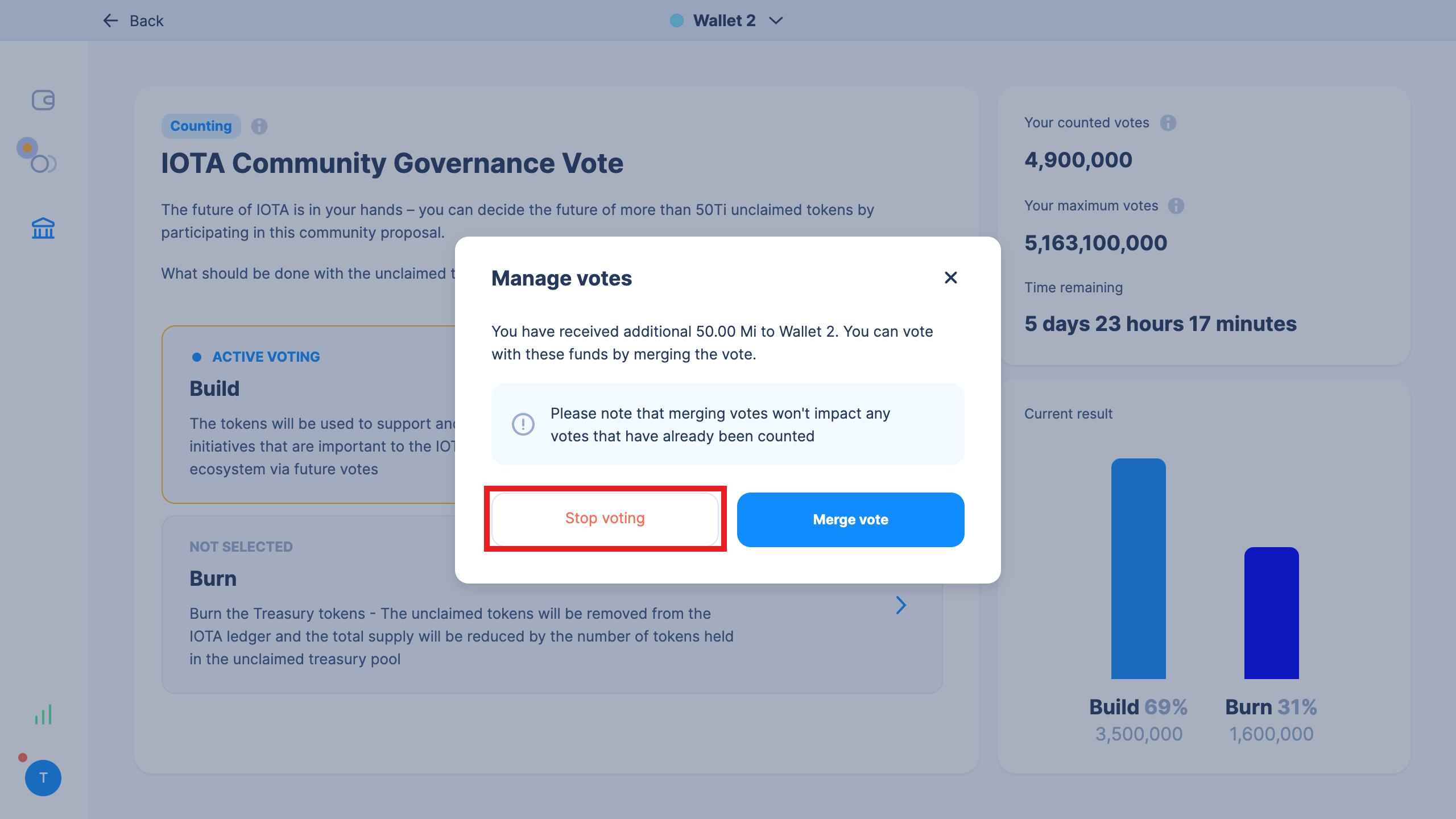 This is also possible, but as counting of votes is already happening while you have not participated in the vote, you may reach fewer counted votes as in the standard "case one." The number of votes you can achieve depends on how long your tokens participate in the vote so that you may have missed a certain amount of possible votes.

Nevertheless, voting is as easy as before. You follow the same steps as described in case one. As the counting is already ongoing, you can see how much time remains until the counting ends. Also, Firefly will display you the current global count of the ongoing vote in real-time. 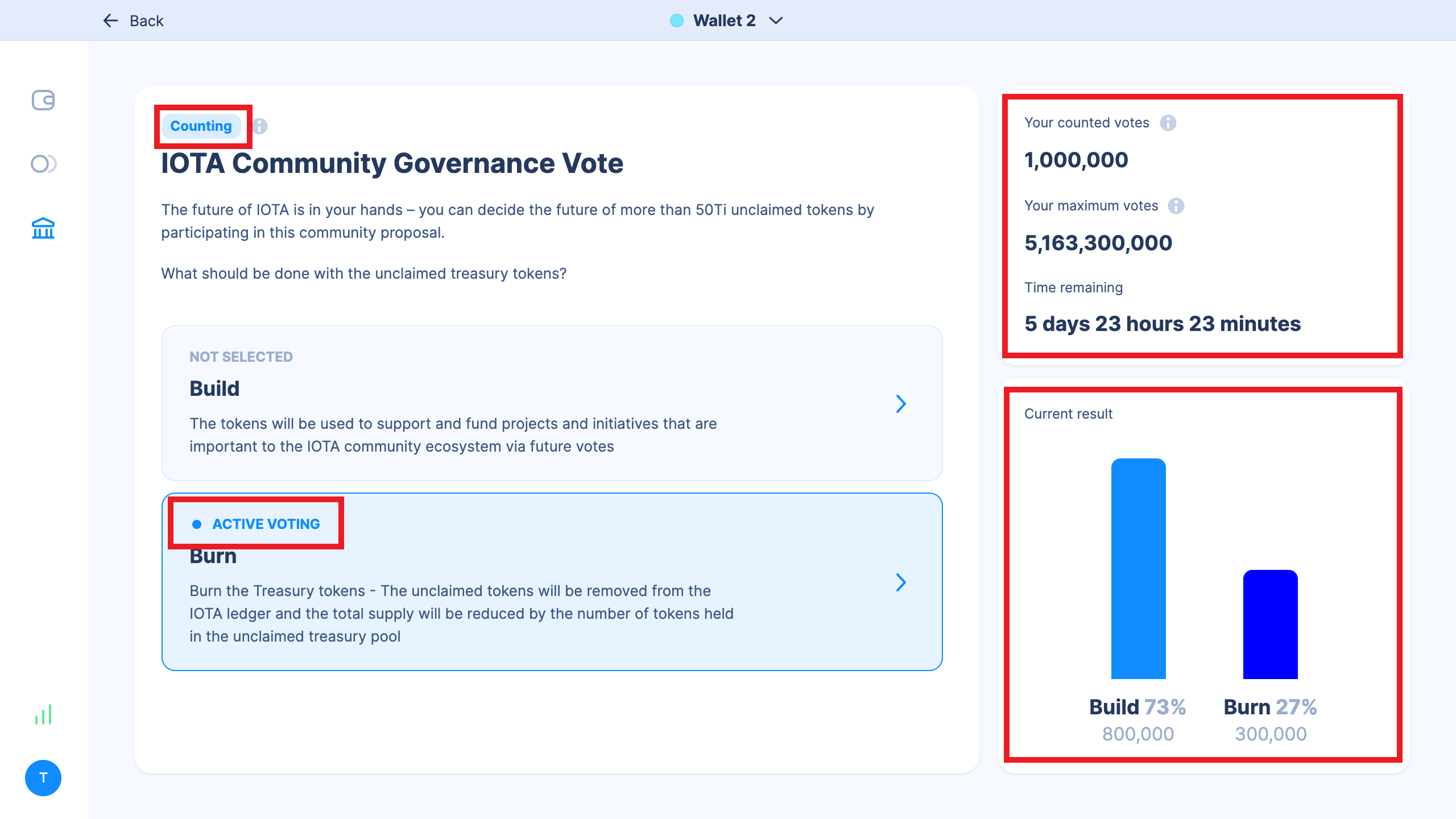 Congratulations! You have completed the voting and can now close your wallet.

Would you like to change your opinion or stop voting? Follow the same steps as described before. The only difference is that now votes already counted for you are not influenced by your decision and remain counted even if you stop voting.

Should you receive more tokens in a wallet already participating in voting, you can easily merge these freshly received tokens to your existing vote. Firefly will highlight once new tokens are available in a Wallet and highlight the "manage vote" option. 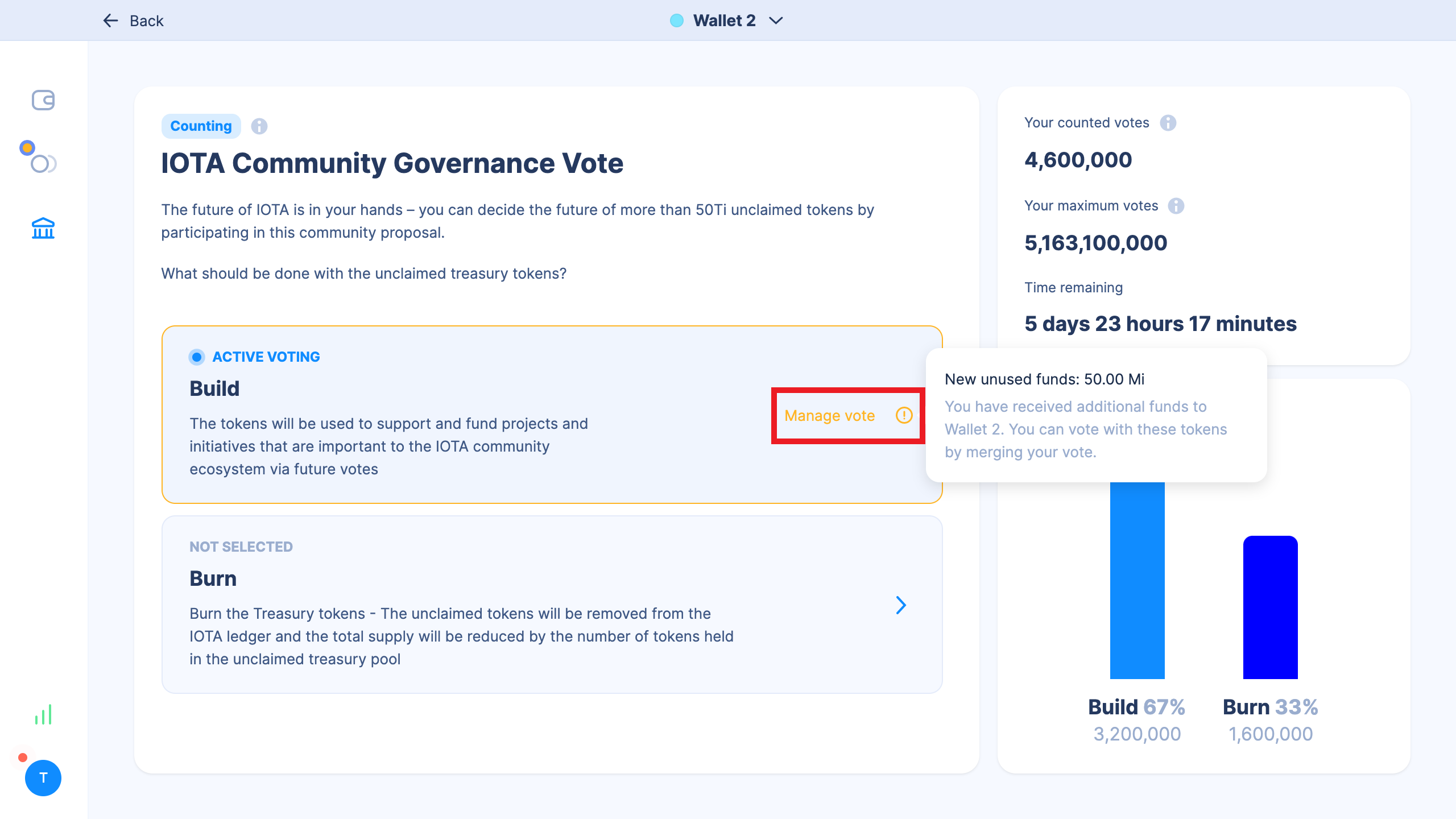 Use this functionality, and Firefly will allow you to either "stop vote" or "merge" the uncasted tokens.

Again, confirm everything with your password or Ledger device, and you are already set.

We hope you enjoy the new Firefly voting functionality. 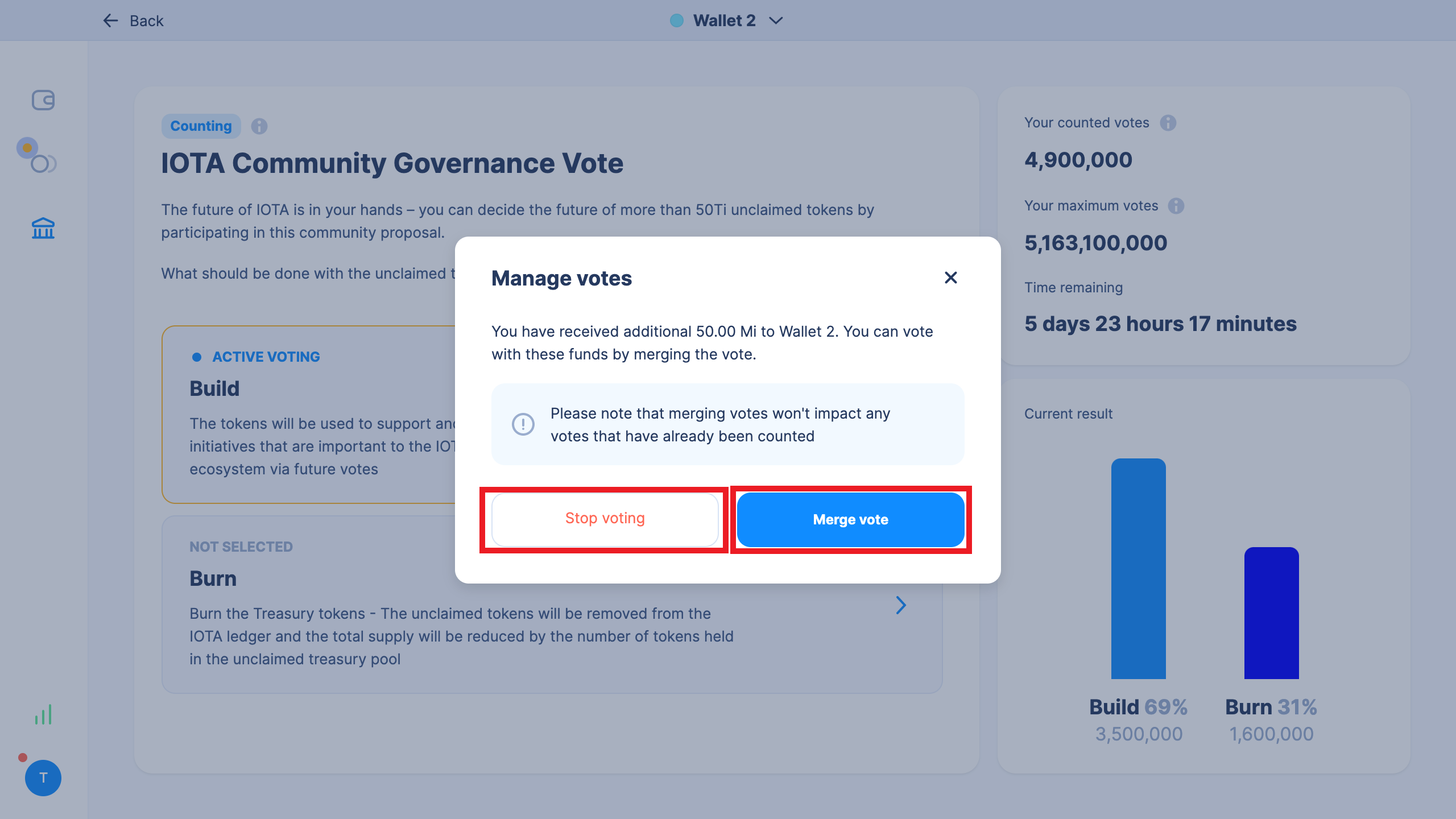 Should you have any problems with the functionality, please visit the #help channel in the official IOTA Discord: https://discord.iota.org.

Learn more about the proposal